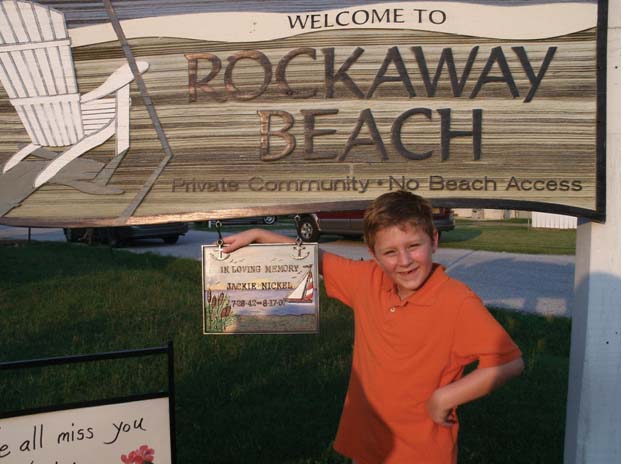 Photo By Anna Ren­ault
Thomas Nickel, grandson of the late Avenue News columnist, editor and reporter Jackie Nickel, is pictured with a plaque in Jackie’s honor which was dedicated on what would have been Jackie’s 68th birthday on July 28.

The name Jackie Nickel still rings bells of fond memories, political fights, and controversial editorials for many ‘Avenue News’ readers and tugs at the hearts of family, friends, former co-workers, and neighbors.

Remembering Jackie Nickel is a daunting task. The woman was simply amazing. She was sweet, kind, and caring. Jackie loved helping others, researching history, as well as being a community activist. If she thought something was wrong, she set about trying to ensure it was corrected. In the case of community development, sometimes this meant stopping something from happening before harm was done.

On July 28, Jackie would have been 68 years young. Unfortunately she went to her heavenly reward three years ago. However, she is still fondly remembered by so many whose lives she touched. Many of those who remember, especially her Turkey Point/Rockaway Beach neighbors, attended a plaque dedication ceremony in Jackie’s honor on this anniversary of her birth.

“This is something we’ve wanted to do since we lost Jackie,” stated Kim Goodwin, President of the Rockaway Beach Improvement Association (RBIA). “She did so much for us, she deserves this and more.”

Many of the local residents agreed. Goodwin welcomed everyone to the ceremony and read a beautiful poem expressing the love and loss felt by those in attendance.

Denise Woutila, Secretary – RBIA, also spoke of Jackie’s impact on the community as well as on herself. As a relatively new Essex/Middle River resident, Woatila quickly learned much of the area’s history and the importance of having pride in one’s heritage as a result of her friendship with Jackie. She pointed out how much more she learned about her dear friend after reading an online blog by Tom Warner. She said, “Just Google Jackie Nickel and you’ll get a long list of sites telling you all about her.”

Kevin McDonough, local resident and high school student at Our Lady of Mt. Carmel, also spoke of the impact Jackie Nickel had on his young life. He explained how he chose Jackie as the subject of a “Champion of Courage” essay he wrote due to her neighborliness, friendship, wisdom, and her love of history. Jackie’s influence on McDonough’s life has led to his willingness to be an active member of his community, taking pride in his community and environment. He credits her inspiration with encouraging him to always be willing to give back.

Jackie’s family, including her beloved grandson Thomas Nickel along with his parents Michael and Christina Nickel were in attendance along with Jackie’s oldest son, Scott Huffines and his wife, Kristen. Thomas did the honors of hanging the plaque onto the Rockaway Beach sign at the corner of Turkey Point Road and Rockaway Beach Road. It was noted that Kim Maigetter painted the plaque and her husband Brennan installed the hardware necessary to hang it.

Michael Nickel thanked all who attended and shared the family’s appreciation for the love and honor that is continuously expressed by so many for their mother, Jackie Nickel. They are grateful that her legacy continues to shine through those who continue to advocate for those things that Jackie held so dear – the community, the environment, and the pride in knowing one’s history.

For those who are new to the area and didn’t know Jackie, just ask around. You’ll hear lots of stories. Briefly, she was proud that her maternal grandfather owned the Gayety Theater in East Baltimore. She was a wife, mother of three, and grandmother of one. She was a teacher at Our Lady of Mt. Carmel and Back River Elementary School. She was editor to both ‘The Avenue News’ and ‘The Essex Times.’ In her semi-retirement she returned to The Avenue News as a weekly editorial columnist and freelance reporter. In 1999, she published “A History of Essex” to honor the 90th Anniversary of Essex. In 2002, with the help of Chesapeake Publishing (The Avenue News’ parent company) and a grant from Baltimore County’s Office of Community Conservation, Jackie published her book, “Memories of Old Middle River.” In April 2007, just a few months before her death, she published her dream book, “Essex,” a pictorial history of the area published by Arcadia Publishers as part of their ‘Images of America’ series. She was an environmentalist, a community leader and activist. Her shoes are too big to be filled!