Matriarch of Back River Neck peninsula looks back on 100 years

Posted on September 2, 2013 by Scott Huffines

On Sunday, Nov. 26, 2006, Mrs. Mae Beck greeted over 100 guests at her 100th birthday party wearing a gold locket well over 100 years old. “My father gave it to my mother on their wedding day,” related the lovely lady of honor as she caressed the gold heart pendant worn on a gold chain around her neck. 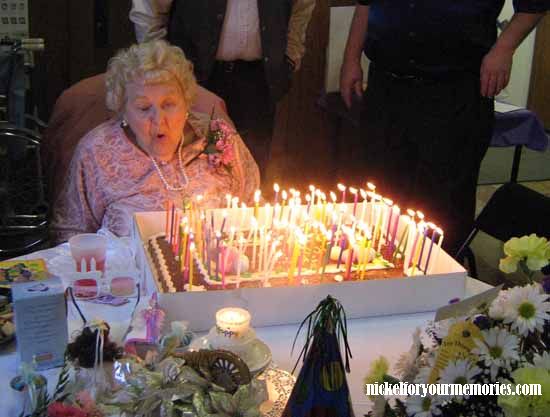 Mae Beck blew out all 100 candles on her birthday cake at a celebration with family and friends on Nov. 26, 2006. (Photo by Jackie Nickel)

The heart was a fitting symbol for the centenary celebration which saw long-time friends and colleagues greet Mae at the pastel decorated hall of Back River United Methodist Church. Mae’s thick silver hair framed her smiling face as son Danny and daughter-in-law Joyce, who organized the party, stood by her side. Mae was a vision in rose wearing a two-piece lace suit tailored by her friend Marie Rogers.

A few days after the 100 candles were blown out and all the cards and gifts put away, Mae Beck took time to look back on her remarkable life.

Mae Velte’s father Charles was a farmer raising crops on 150- acres known as White House Farm at the head of Browns Cove as well as transporting the produce to market in Baltimore City. Trips up the oyster shell-paved Back River Neck Road were tiresome but exciting, by horse and buggy and later by Model T, traversing “land that was nothing but woods,” recalls Mae. You’d go past the Page property, which later became the maintenance area of Rocky Point Golf Club; next came Wildwood Beach where Mae’s father often delivered strawberries to a large home at the end of the road.  Waiting on the veranda, which surrounded the home, was a petite woman whose home, Mae later found out, was a brothel – one with a very famous and frequent visitor.

A little farther up the Neck was Evergreen Lane with a home and land owned by Edward Nicholson, a gentleman farmer. Next were several large tracts surrounding what is now known as Diffendal or Airport Road owned by General George Brown, the son of Alexander Brown of the Baltimore financial firm Alex. Brown & Sons. The Browns spent summers at the house which in the winter served as a hunting (or “ducking”) lodge. 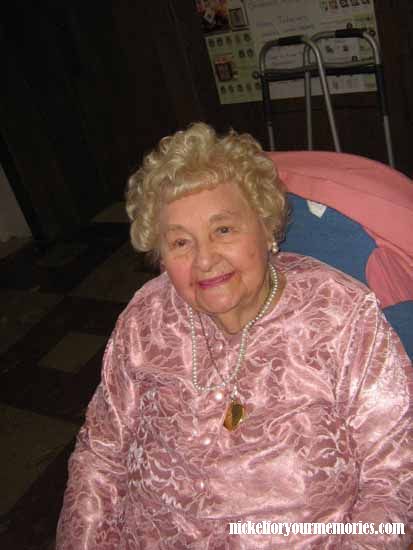 Traveling up the Back River peninsula, Mae and her brothers often visited blacksmith Frank Ruff who lived behind his shop at the corner of Back River Neck and Holly Neck roads. Pounding on a huge anvil, the “smithy” crafted horseshoes and wagon wheel rims. “We used to watch the iron glow red hot and the sparks would fly,” recalled Mae.

A big gum tree at the same location served as the mounting post for all the mailboxes of the neighborhood. Roy Norris was a deliveryman for what then was called the Rossville Post Office. The mailman traveled by horse and buggy to drop off letters at Back River Neck’s makeshift collection site.

The farmland surrounding what is now called Somogyi Lane was owned by the Schluderburg-Kurdles who owned Baltimore’s successful Esskay Meat Co. Mae remembers cows with bells around their necks feeding in the pasture there, while getting fattened up presumably for slaughter.

Several “colored” families lived in the area of the old schoolhouse, now known as Cheery Day Nursery, recalls Mae. The Smith brothers had a log cabin near the first Back River School and Uncle Cal Miles and his family lived close by the old Dvorak egg house. The Kirby family lived at the Holly Neck intersection while the Brown clan owned several parcels farther up the peninsula.

Aunt Levy Brown was a midwife who helped deliver many local babies.  Since Ebersberger’s store at the intersection of Turkey Point and Back River Neck Rds. was the closest telephone, Mae’s brother Charles went there to call Dr. Mace when his brother Edward was about to be born.  As Dr. Mace prepared to travel from Rossville (now theFranklin Square area) by horse and wagon, Charles went on to get Aunt Levy who got there in time to help with the delivery.

Mae’s mother, Mathilda, was a sickly woman despite bearing six children. And Mae, being the only daughter, held much of the responsibility of the day-to-day operations of the farm household. But throughout her six years of schooling and many years of cooking, cleaning and other chores, Mae took great delight in roaming the wilderness that was Back River Neck, one of the earliest developed peninsulas in BaltimoreCounty.

Past the Mattheu and Schenning farms, and next to Back River Church was a two-story house that once was owned by a fisherman named Hughes, recalls Mrs. Beck.  Still standing and renovated, it is one of the oldest houses in the area. Then came Cape May with a picnic grove owned by the Shivers family and a little farther on, a swimming club for African Americans called Twin Pines.

While the Velte children traveled three miles each way to school from the lower end of the peninsula, their two teachers rode by electric rail one hour each way on a car line that originated at Baltimore and Holliday Sts. At Josenhans Corner they disembarked and were transported by horse and buggy to the school. A crowd often waited to board the car heading back into the city where they then would transfer to other locations.

Josenhans Corner housed a bar and general store as well as a hall where May sometimes attended dances and “socials” on Saturday evenings. One of her brothers would drive them in the family’s horse and buggy, guided by the light of kerosene lanterns mounted on the sides. While the horses were stabled on the lower floor of Academy Hall, which still stands at the site, the wooden dance floor echoed with the dancing feet of young men and ladies.

But back at the farm, there was plenty of work to be done before socializing. Mr. Velte sold produce at the Light St. wholesale market and brought home 200-lb. barrels of flour and sugar to last the winters. Mae remembers a huge snowstorm, which occurred on Feb. 22,
1922, that brought snow up past the farmhouse windows. The family huddled in with kerosene lanterns and woodstoves. Outside was the pump and outhouse, but the family was prepared with an inside commode. They had to thaw frozen water for the household and use planks to plow their way out. In the fall they lined the roads with cut saplings to make “corduroy” paths for better traction.

The Veltes killed, smoked and salted pigs each November to last through the harsh winters. They also had chickens, ducks, and guinea hens in the barn along with potatoes, carrots, turnips and red beets. Mae helped “put up” apples, peaches and strawberries. “It was nothing but hard work.”

Often there was sickness. Some of the home remedies Mae remembers for a bad cough were a swallow of goose grease or juniper tar mixed with sugar.

Winters were long, punctuated by few visitors. But the neighborhood received regular calls from a Jewish man named Mr. Silverman who came by every six weeks or so to purchase fur pelts. He carried a trunk on his back filled with clothing offered for trade. Mr. Silverman sometimes spent the night with neighbors while waiting for the muskrat trappers to return with their goods.

Mae and her brothers often traveled down Holly Neck or Turkey Point where Mae’s friend Mabel Daniels lived. Down Holly Neck Rd., Cedar Beach was one big tract owned by “the flour people,” the Ruhl family; the Shaefers had an apple crusher from which delicious cider flowed; Dan Homberg owned almost all the farmland on Holly Neck; and the Foehrkolbs owned Breezy Point bathing beach at the end of the road.

Summertime on the peninsula was like paradise with clean, clear water to swim and fish in. You could see the soft crabs on bottom and scoop them right out of the water by hand, says Mae. As the young girl grew into a beautiful young woman, she developed an even closer relationship with the river, becoming the wife of waterman and championship trap shooter Franklin Beck.

This entry was posted in Essex / Middle River, Tributes. Bookmark the permalink.