Marian S. McKew, 81, owner of Gayety Theater on The Block 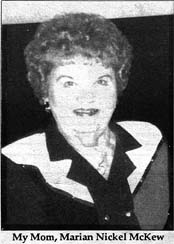 Marian S. McKew, who owned the Gayety Theater on Baltimore’s Block as strip tease and burlesque shows faded into the twilight, died Saturday (12/23/1995) of cancer at Franklin Square Hospital Center. She was 81.

The Block landmark at 405 E. Baltimore St. — which opened two years after the Great Baltimore Fire in 1904 — was owned by her father, John H. “Hon” Nickel, a German immigrant who operated the theater from 1914 until his death in 1951.

Her father managed the burlesque house in its salad days when featured performers included Phil Silvers, Gypsy Rose Lee, Jackie Gleason and Ann Corio and a young Marian Nickel learned to keep the books while attending the Institute of Notre Dame in downtown Baltimore.

“My mother was very insulated from everything that went on,” said Mrs. McKew’s daughter, Jacqueline Nickel of Rockaway Beach in eastern Baltimore County.

“She often told me her father wouldn’t let her out of the office to sort of protect her.”

When Mr. Nickel died in 1951, he turned over ownership to his daughter and his son, John H. Nickel Jr. Mrs. McKew bought out her brother in the late 1960s and sold the theater outright in 1976.

The building now houses an adult film and magazine store.

“When you mention the Gayety, it brings all sorts of memories forth,” Ms. Nickel said.

“But even when she was most heavily involved, she went to the theater’s office three times a week to keep the books and write out checks to the workers. That was it.

“While she had this business, she did the Hutzler tea room every Wednesday, bowled, had a life that was totally out of the realm of The Block.”

Still, some private embarrassment was shared within the family over her mother’s job.

At St. Bernard’s parochial school in Waverly, Jacqueline Nickel remembered, a nun asked students what their parents did for a living.

“I told the sister and my classmates that my parents owned a theater,” she said. “Later, at Notre Dame Prep, I wove around the truth by telling everyone my mother and father were in real estate, which they were.”

She remembers that her parents took her to Mass at St. Vincent DePaul Roman Catholic Church on Front Street every Sunday, then to Baltimore Street where her mother looked over the previous night’s receipts.

Mrs. McKew was born in the Nachmann Hotel near Baltimore Street and Market Place, a stopover for baggy pants comedians and dancers who traveled the country’s burlesque circuit. The hotel was owned by her father, who parlayed his business savvy into ownership of several other properties, which eventually became known as The Block.

“My grandmother died when my mom was 13 so she really became the lady of the house with all the responsibilities to my grandfather and her brother,” Ms. Nickel said.

By the time Mrs. McKew came into sole ownership of the Gayety, the flavor of the old house was disappearing. Strip tease and racy one-liners became valentines from another day.

Her managers booked Irma The Body, Tempest Storm and Chili Pepper in the 1960s and although those dancers attempted to keep bump and grind alive but, suddenly they were almost too tame for that era’s sexual revolution.

Mrs. McKew was one of the founders of the Rockaway Beach Improvement Association and enjoyed ceramics at Essex Senior Center. Before she became ill, she enjoyed cooking sour beef and dumplings from scratch.

A Mass of Christian burial will be offered at 9 a.m. tomorrow at Our Lady of Mount Carmel Roman Catholic Church, 1704 Eastern Ave. in Essex.

Other survivors include three grandchildren.