March is Women’s History Month — the perfect time to write about the strong and caring women who have influenced the way we live our lives. It was just 85 years ago that women were given the right to vote and hold office through the 19th Amendment, and have we ever come a long way, baby!

While my Mom and three aunts definitely were role models as strong women through my early 30s, it wasn’t until I began work as a journalist that I got to meet women who had far more widespread influence. 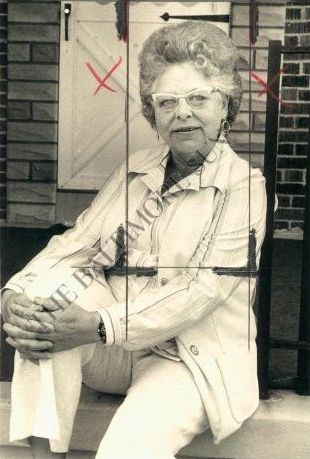 Two weeks ago as I was going through The Avenue archive photos for a new book on Essex history two faces seemed to jump from the box and jar my memory. Alberta Pugh and Helen Delich Bentley. “Now here are two women who really influenced me,” I told Jean who was sitting behind her desk. As I continued sifting through old photos, the memories came pouring back of all the events I’ve covered and the strong women I’ve met since my first freelance Avenue article in 1979. It was an unexpected flood of emotions that I felt then and reflected on all day long.

Alberta Pugh was one of the earliest and longest serving presidents of the Essex-Middle River Council (EMRCC) and was she ever a pistol, stirring things up and getting the government moving! Before I ever got to meet Mrs. Pugh, I was used to getting late night phone calls from her discussing pressing community issues, some like the Holly Neck development, still in the news today. Alberta wasn’t actually calling for me but for my husband who was an EMRCC member and union activist. But he was either working the night shift, at a union meeting or in bed, so l took the call.

As a stay-at-home mom with three little kids, those 11 p.m. rings added some excitement to my Mommyhood and I think Alberta knew that and decided to broaden my world. She would fill me in on all the political scoops and scandals while I listened in astonishment — blind until then to controversial issues beyond nosebleeds and broken toys in my back yard.

A few years went by and my marriage broke up, my kids were older and I went to work at The Avenue. I had met Alberta at a few fundraisers but didn’t get to know her until my reporting took me to EMRCC meetings at Victory Villa Community Center. Alberta was already sick with the cancer that took her and the VP was filling in as president, but Alberta still kept in touch by phone. I think it was she who asked me to do an interview with her, but it could be the other way around. There were things she needed to say before she died, of that I’m certain.

We met at the home of Alberta’s best friend, Olga Zubris, in Foxridge off Back River Neck Road. Olga was another great lady and I’ve since become friends with her daughter Connie. Alberta shared her life story, telling how she became such a well-known activist, even having run for a seat on the County Council, educating me as well on the nuances of local government. The story was quite a coup for the paper since everyone knew she was not well and it proved to be her final interview. I never forgot the things she told me about fairness and fighting for what’s right — “because somebody has to do it.”

Time passed and I continued covering civic council, meetings and even signed up as a member. One night around 10 or 11 the phone rang and it was Olga Zubris. “Jackie, there’s something Alberta asked me to tell you. She wanted you to be on the Board of Governors of the civic council.” I was honored that she thought I had the potential to help lead and guide. So when it was election time, I ran and was elected and I’ve been there ever since, once as president, other times in various offices, but always an active member – or should I say activist member.

So in this month of celebrating Women’s History, I thank Alberta for broadening and enlightening my world, showing me and others in the civic arena how to choose our battles and fight the good fight.

Also, I must acknowledge Helen Delich Bentley whom I met while covering a Back River Neck Peninsula Community Association meeting in the early 80s. A former journalist and host of the Sunday tv program “The Port that Built a City,” Helen was well known before she entered the U.S. Congress. I was somewhat intimidated by her gruff voice but proceeded to ask questions and eventually shared with her my fledgling efforts at covering community news and some pressure I was getting regarding a development issue. “You just gotta keep going after the story and tell truth,” was her advice, which has served me well over the years.

Both Mrs. Bentley and Alberta Pugh have influenced and enriched my life and earned their place in the pages of women’s history. 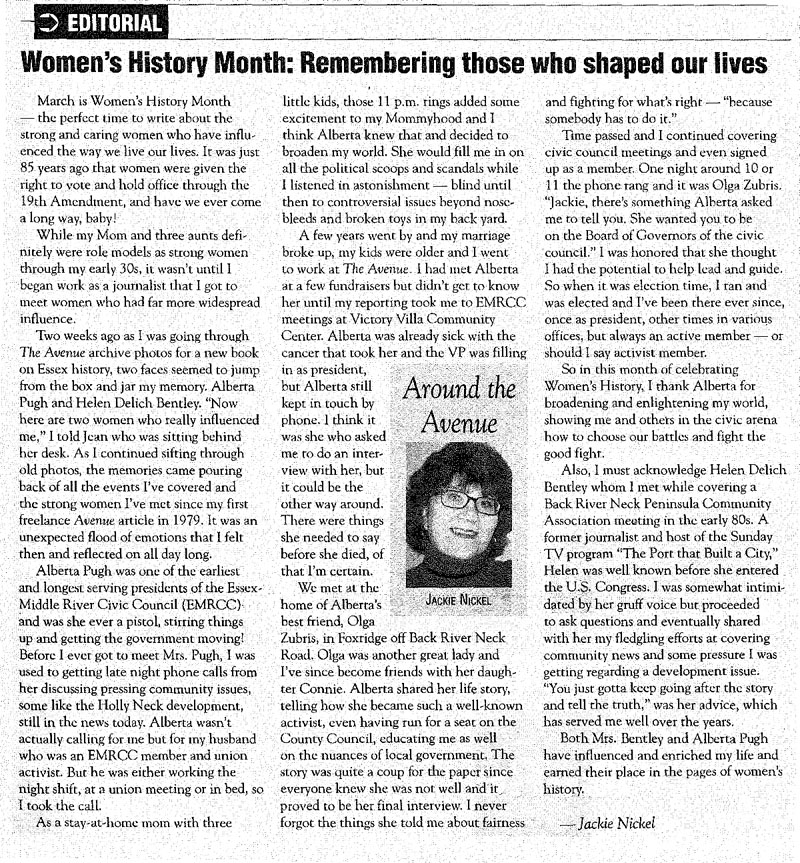 This entry was posted in Editorials, Essex Newspapers. Bookmark the permalink.