How can a wildlife creature be so human? 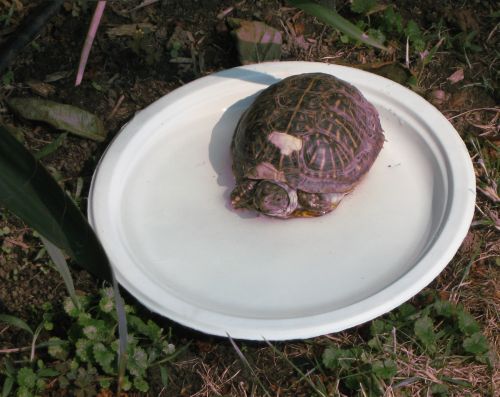 A couple months ago I discovered a box turtle in my yard and was delighted with this increasingly rare sighting. He or she had two white scars on his/her back and seemed to have seen some tough times so, of course, I immediately identified with the poor thing and we sort of bonded. Almost every week I’d see the turtle which was easily identifiable by the scars. Might they have been caused by a lawn mower? A fight with a snapping turtle? I could only imagine…

This shelled critter seemed to crave human companionship as I found out when speaking with neighbors. He/she has traveled four or more houses down the road and back several times, using the roadway instead of cutting under fences and through back yards and we’ve had to move the daring traveler to safer ground on more than one occasion.

Before the heavy rains last week, my turtle friend seemed to sneak up on me every time I watered my garden so I figured he needed a good soaking and gave him a sprinkle from the hose. He (I was thinking the turtle was a boy then) kept hanging around so I put out some water in a large plastic plate and no sooner had I turned my back than he climbed right into the dish and took a bath. I just fell in love with this little guy!

After all the rain on Friday, I figured I wouldn’t see the turtle again for a while but yesterday as I was cleaning up storm debris, there he was, right behind me as I stepped backward and onto his shell! I thought I’d stepped on a rock and as I turned around was distraught to see my poor turtle in a puddle of fluid I’d squished out of him. Lucky the little creature seemed none the worse off from my misstep and just looked up at me with an understanding look in “her” eyes. I decided it’s a girl because she’s so understanding.

My turtle friend kept hanging around seeming to want something from me, so I put out another plate of water and some ground beef. She completely devoured the hamburger then found a secluded spot between my porch steps and the wall and crawled in to take a rest. When I next went back to check, she had moved on, but she’ll be back I’m sure.

This turtle is not shy and doesn’t hide in her shell. She likes to be around people and obviously trusts them. She has seen hard times and has the scars to prove it. She has a tough outer shell but is soft inside. She has eyes, a nose (well, two nostrils), and a mouth just like me. She can get hurt and get over it. In drought and flood, in hardship and dangerous conditions, my friend the box turtle still sticks her neck out, holds her head up high and keeps going. No wonder it’s so easy for me to relate.

This entry was posted in Rockaway Beach / Turkey Point, Wildlife and tagged Wildlife. Bookmark the permalink.