Sometimes you just have to let nature take its course

One of the last articles Jackie wrote. 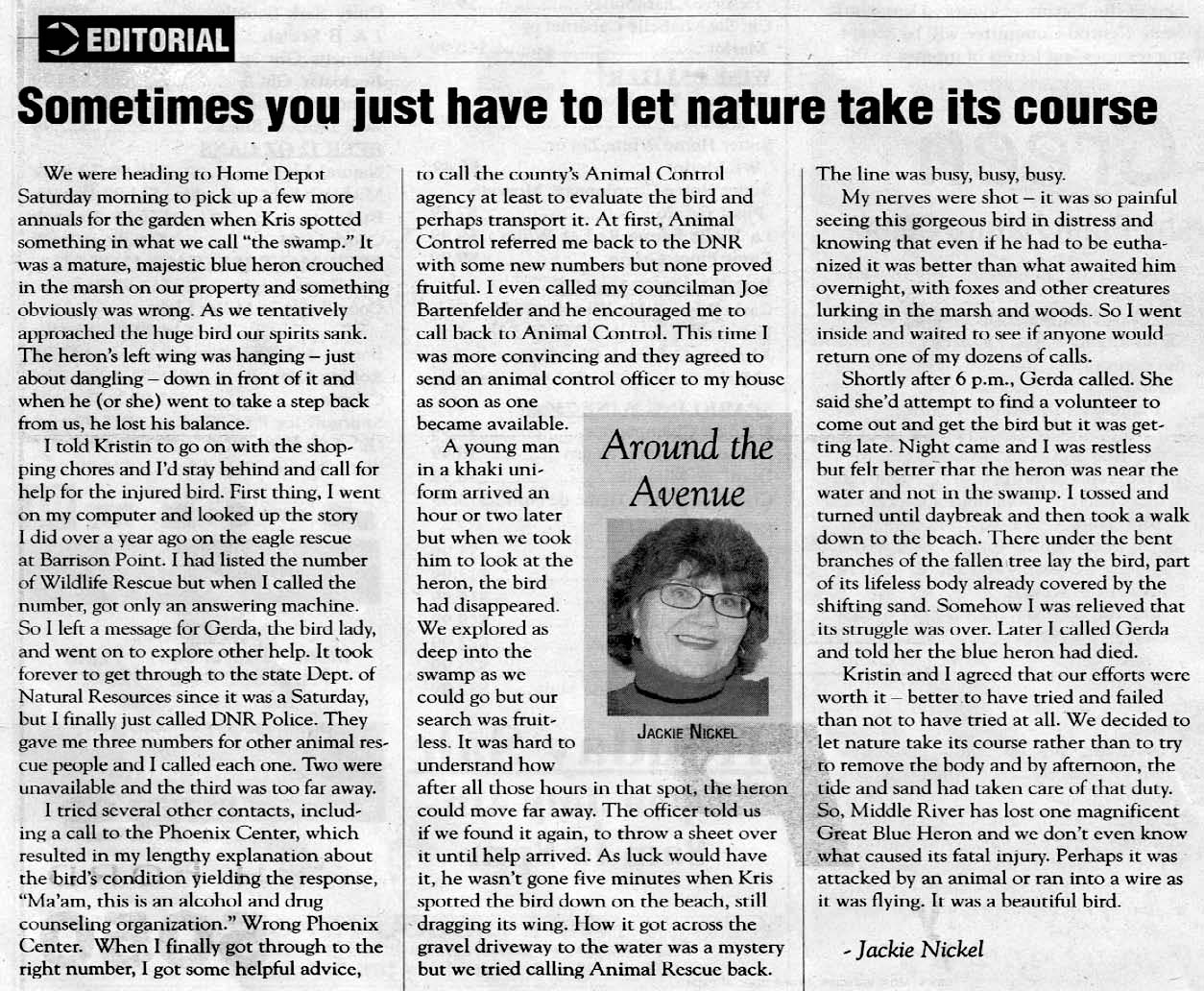 We were heading to Home Depot Saturday morning to pick up a few more annuals for the garden when Kris spotted something in what we call “the swamp.” It was a mature, majestic blue heron crouched in the marsh on our property and something obviously was wrong. As we tentatively approached the huge bird our spirits sank. The heron’s left wing was hanging – just about dangling – down in front of it and when he (or she) went to take a step back from us, he lost his balance.

I told Kristin to go on with the shopping chores and I’d stay behind and call for help for the injured bird. First thing, I went on my computer and looked up the story I did over a year ago on the eagle rescue at Barrison Point. I had listed the number of Wildlife Rescue but when I called the number, got only an answering machine. So I left a message for Gerda, the bird lady, and went on to explore other help. It took forever to get through to the state Dept. of Natural Resources since it was a Saturday, but I finally just called DNR Police. They gave me three numbers for other animal rescue people and I called each one. Two were unavailable and the third was too far away.

I tried several other contacts, including a call to the Phoenix Center, which resulted in my lengthy explanation about the bird’s condition yielding the response, “Ma’am, this is an alcohol and drug counseling organization.” Wrong Phoenix Center. When I finally got through to the right number, I got some helpful advice, to call the county’s Animal Control agency at least to evaluate the bird and perhaps transport it. At first, Animal Control referred me back to the DNR with some new numbers but none proved fruitful. I even called my councilman Joe Bartenfelder and he encouraged me to call back to Animal Control. This time I was more convincing and they agreed to send an animal control officer to my house as soon as one became available. 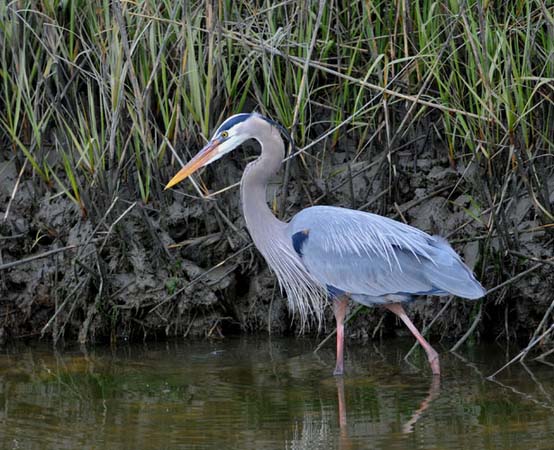 A young man in a khaki uniform arrived an hour or two later but when we took him to look at the heron, the bird had disappeared. We explored as deep into the swamp as we could go but our search was fruitless. It was hard to understand how after all those hours in that spot, the heron could move far away. The officer told us if we found it again, to throw a sheet over it until help arrived. As luck would have it, he wasn’t gone five minutes when Kris spotted the bird down on the beach, still dragging its wing. How it got across the gravel driveway to the water was a mystery but we tried calling Animal Rescue back. The line was busy, busy, busy.

My nerves were shot – it was so painful seeing this gorgeous bird in distress and knowing that even if he had to be euthanized it was better than what awaited him overnight, with foxes and other creatures lurking in the marsh and woods. So I went inside and waited to see if anyone would return one of my dozens of calls.

Shortly after 6 p.m., Gerda called. She said she’d attempt to find a volunteer to come out and get the bird but it was getting late. Night came and I was restless but felt better that the heron was near the water and not in the swamp. I tossed and turned until daybreak and then took a walk down to the beach. There under the bent branches of the fallen tree lay the bird, part of its lifeless body already covered by the shifting sand. Somehow I was relieved that its struggle was over. Later I called Gerda and told her the blue heron had died.

Kristin and I agreed that our efforts were worth it – better to have tried and failed than not to have tried at all. We decided to let nature take its course rather than to try to remove the body and by afternoon, the tide and sand had taken care of that duty. So, Middle River has lost one magnificent Great Blue Heron and we don’t even know what caused its fatal injury. Perhaps it was attacked by an animal or ran into a wire as it was flying. It was a beautiful bird.

This entry was posted in Jackie Nickel. Bookmark the permalink.